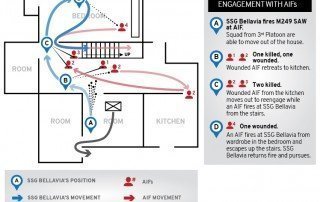 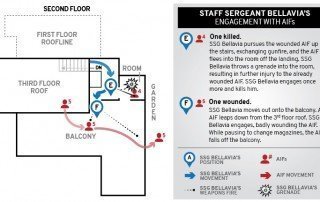 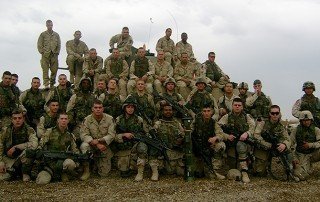 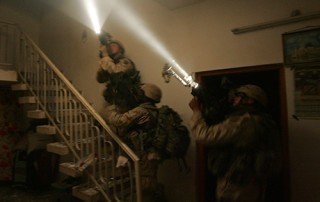 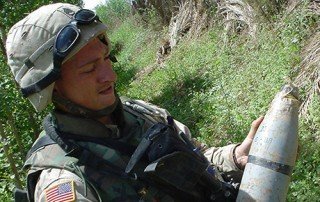 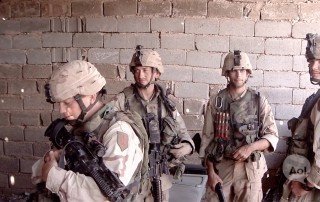 Staff Sgt. David G. Bellavia was a squad leader in support of Operation Phantom Fury in Fallujah, Iraq. Their mission on the night of Nov. 10, 2004, was to clear a block of 12 buildings, where it was thought six or more insurgents had taken shelter. A Bradley Fighting Vehicle was supposed to provide fire support, but a malfunction on its 25mm cannon meant the platoon would have to kill or capture the anti-Iraqi forces (AIF) without it.

After finding nothing in the first nine buildings, Bellavia’s platoon moved into the next compound, where they immediately came under fire from the front hallway. Two insurgents manning machine guns under a stairwell had been waiting to ambush the Soldiers as they attempted to clear the home. Moments later, more AIF opened fire from a window. The combined gunfire from the stairwell and the window meant the Soldiers were trapped.

Rounds from the insurgent weapons struck the walls and floor, and began wounding Soldiers. Two were bleeding from the face due to shattered glass, and another was grazed by a round to his stomach. Unless something happened quickly, the trapped Soldiers would die.

“I could not use my rifle, I look down and I had a round that hit the magazine, couldn’t have asked for worst luck.”

Recognizing the danger they were in, Bellavia exchanged weapons with an M249 SAW gunner and entered the fatal funnel of the room. As enemy rounds snapped past and impacted the walls around him, Bellavia squeezed the SAW’s trigger until it was empty, forcing the enemy to take cover and allowing the Soldiers to move into the street.

Staff Sgt. Bellavia then called for another Bradley Fighting Vehicle to suppress the outside of the building. After the BFV fired several 25mm rounds into the house, Bellavia decided to move back inside to determine whether insurgents still occupied the bottom floor of the house. He placed two SAW gunners and another Soldier in the courtyard as the inner cordon while he and Michael Ware, a TIME magazine journalist, entered the house.

Upon entering, Bellavia heard insurgents whispering from the other side of the wall. Mr. Ware was told to run if anything happened, but he insisted on following. Bellavia entered the room and fired at the insurgents, but was forced to fall back after receiving return fire.

Staff Sgt. Bellavia looked into the room a second time and saw one of the insurgents loading an RPG launcher. Understanding how devastating the weapon could be to his platoon, Bellavia single-handedly assaulted the room and killed the insurgent with the RPG. A second insurgent fired a machine gun at Bellavia, who shot and wounded him before he fled into a kitchen.

For some time, Staff Sgt. Bellavia and another Soldier exchanged gunfire with the insurgent hiding in the kitchen. When the Soldier began to run low on ammunition, Bellavia told him to leave and bring back an M16 and a shotgun.

Alone again, Bellavia realized that his back was facing a room he had not cleared. As he quickly moved into it, clearing each corner, an insurgent ran down the stairs and started firing at him. Bellavia found cover against a wall and thought about his next move. Through the gunfire he could hear screams from upstairs and from the room he had just cleared.

While Bellavia tried to assess the situation, the wounded insurgent in the kitchen ran toward the bedroom door and began blindly firing an AK-47. Bellavia returned fire and continued to improve his position for a better shot. Once the insurgent exposed himself in the doorway, Bellavia aimed and fired, eliminating the threat.

The insurgent on the stairs immediately began firing again, but as he turned to aim, Bellavia saw his exposed position and shot him. The insurgent slumped to the floor, mortally wounded.

Suddenly, another insurgent leapt out of a wardrobe and began firing as he tripped on the furniture, pulling it down to the floor. Luckily, it landed with both doors open, providing Bellavia with cover. The insurgent got to his feet and attempted to move across a bed, but he lost his balance and Bellavia shot him multiple times. As he fell to the floor, the insurgent fired a burst from his weapon, narrowly missing Bellavia. The wounded insurgent then picked himself up and ran upstairs to the second floor.

“I hit blood. I lose my entire footing and I just fall. And then the guy shoots a round right where I was standing.”

Bellavia followed the blood trail up the stairs, where he heard the insurgent in a room to the left. Bellavia tossed a grenade into the room, and the blast knocked the insurgent onto the second-story roof. Seriously wounded from gunfire and shrapnel, the insurgent tried to give away Bellavia’s position until he was silenced.

Exhausted both physically and mentally, Bellavia took off his helmet, set down his weapon and waited for the other Soldiers to arrive.

Then, while Bellavia smoked a cigarette, another insurgent jumped from the third-story roof to the second story. As the insurgent landed just three feet from Bellavia, his knees buckled, dropping his weapon and as he reached to grab his weapon, Bellavia had enough time to shoot him with his M16. When the wounded insurgent attempted to raise his weapon again, Bellavia fired the rest of his magazine into him, causing the insurgent to fall off the roof into the garden below. Bellavia was then called back inside to move his unit out of the area due to an incoming close air-support mission.

That night, Bellavia single-handedly saved an entire squad, risking his own life to allow his fellow Soldiers to break contact and reorganize when trapped by overwhelming insurgent fire. He then voluntarily entered and cleared an insurgent strong point, killing four and seriously wounding another. His actions stand as a testament to those who put everything on the line as they do the grim work required to keep each other safe and alive on the battlefield.